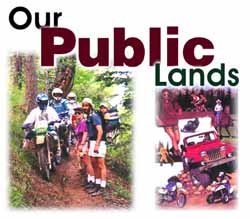 Roadless Rules, OHV Rules, Roadless Areas, and OHV Management in general is a hot topic worthy of you spending some time reading to understand just what this means to motorized recreation, and what we need to do to ensure public lands are for the public.

NOTE: 2004, the info herein is still important to understand, even though it is old. I posted this in 2000 when the debate was hot and heavy. But as I sit here near the end of 2002, the Roadless controversy still exists and still affects our recreation and mulitple use pursuits. Read on for an understanding of the many facets of this.

Here is a brief analysis of the relationship between the roadless initiative, the transportation (roads) rule, and the forest planning rule as provided by:
Adena Cook, Public Lands Director
BlueRibbon Coalition
Phone: 208-524-3062
Fax: 208-524-2836
e-mail: bradena@sharetrails.org

On May 9, 2000, the USDA Forest Service released the Roadless Area Conservation Proposed Rule, a.k.a. the Clinton-Gore Roadless Initiative. It is not intended to be a stand-alone document. Quoting directly from the Federal Register, "The agency has also recently proposed other regulations and policies that address the management of the National Forest system and how the agency must make decisions about road construction in national forests and grasslands...."

Following is a discussion of these three proposals and their relationship.

Ecosystem protection becomes the over-arching goal for which all national forests must be managed. Ecosystem restoration to a pre-Columbian (ancient) condition is how that protection is defined. Production of all other goods and services are secondary.

Absolves itself of responsibility toward local rural economies, stating that national forest lands should not be expected to single-handedly sustain these communities.

Claims that national forest land should be managed to compensate for changes caused by management of private land. As adjoining private land increases production of goods and services, the public land should provide less.

Gives the responsible officer the sole discretion over what topics will be addressed in the planning process, with substantial weight given to topics related to "ecological sustainability".

The authority to consider further or deny a topic is not subject to review, nor is an administrative record created.

Section 219.6 allows the responsible official to begin the NEPA process only after and based on off-the-record processes (detailed in sections 219.4-5) are complete. Subsequent public participation becomes a sham that verifies or records objections to foregone conclusions.

This mimics the cumbersome process by which Endangered Species Act is implemented now: A special interest group pressures the U.S. Fish & Wildlife Service (USFWS) to manage a listed species in a certain way. Studies are conducted, proposals are generated, and the group's request is granted. The USFWS then demands that the land managing agency conform to its findings or violate the Endangered Species Act. The demands of the special interest group, validated by USFWS, then drives and dominates the NEPA process.

The proposed rule makes it clear that there will be far fewer roads open to the public than are currently available. Each road will be subjected to a methodical analysis to justify its existence. This analysis is not generally available and is not subject to review.

The agency claims lack of funding to maintain the roads. Yet, they have not requested from Congress any more than 20% of what they claim they need.

Driving for pleasure has increased 1000% since 1950, and level 2 roads (counted in the number to be decommissioned) are acknowledged by the agency as important for dispersed recreation. More and more recreationists will be crowded onto fewer miles of road.

Areas from which roads are removed will become "unroaded". Their management will be dictated by the same values for which roadless areas are evaluated, with resource protection values predominant.

A standard disclaimer states that because the rule involves mostly new definitions, there is no effect under the Regulatory Flexibility Act.

Foret Service officials state that "decommissioning" can also mean re-assigning the road to a trail status and then maintained as a trail-50" and wider and presumably open to high clearance vehicles. While this could provide some opportunity for dispersed backcountry recreation, this direction is not specified in the rule.

CLINTON-GORE ROADLESS INITIATIVE
The Clinton-Gore Roadless Initiative Draft EIS and proposed rule was released May 9, 2000. Implications of the preferred alternative (proposed rule) are still being evaluated.

Resource concerns dominate the direction for which roadless areas will be managed:

Claims that the proposed rule will not have a significant impact on small businesses per the Regulatory Flexibility Act. However, because of heightened interest and comment, the agency has prepared an initial regulatory flexibility analysis. Comment is invited, but the document is available only upon request.

The proposed rule makes repeated reference to "protection....within the context of multiple-use management" without explaining what "multiple use management" means within the framework of the new forest plan rules and the roads rule.

The Forest Service released their Roadless Area Conservation Proposed Rule and Draft Environmental Impact Statement (DEIS) on May 11, 2000. This process is on a fast track, to be completed by December 2000. They want it signed, sealed and delivered before President Clinton leaves office. This is to be Clinton's positive legacy. It is also intended to collect support from the big environmental organizations for Gore's election next November by giving them their fondest dream, placing a major portion of our public lands off-limits.

We do not suffer under any delusions about what the final decision will be regarding the broad decision to prohibit roads in the selected areas. However, we may be able to influence the manner in which various land uses are treated. We must participate in this process to the maximum extent possible, if not to make it palatable, to at least make it easier to have it thrown out by the courts. We encourage you to attend the meetings conducted by the Forest Service and to submit comments. Your comments should be clear, addressed to the DEIS and relevant to the issues it covers.

Feel free to write me if you have additional questions or need any help.

Thanks and keep recreating on your public lands, DEL